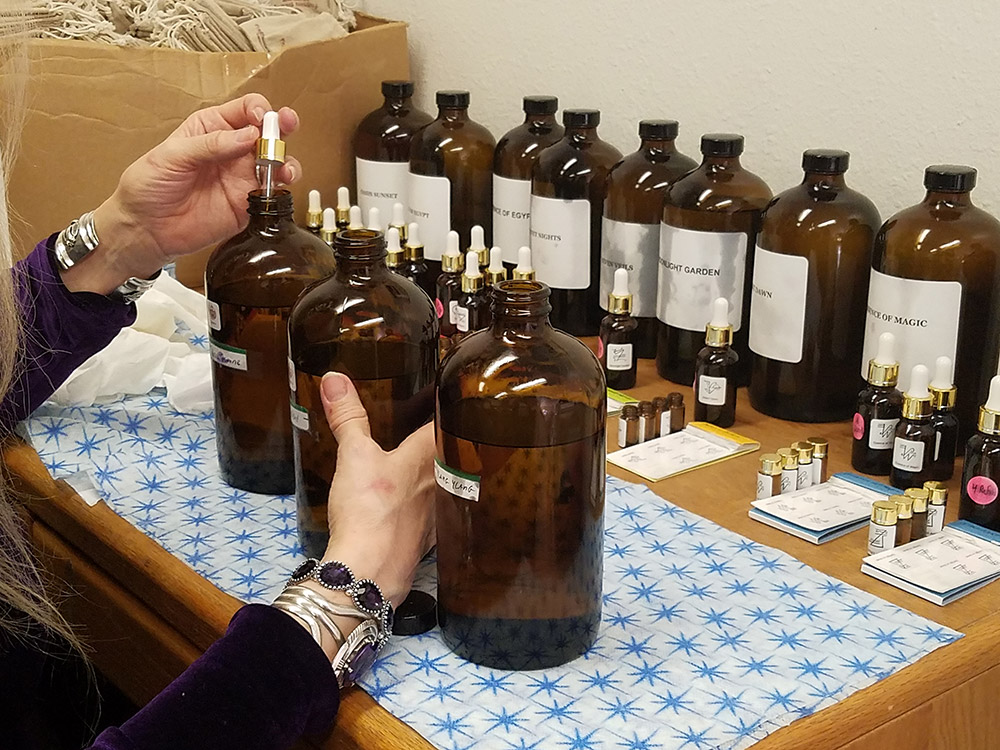 Question:
We asked Tina, who is part of the Fragrance Alchemy support team, what it’s like working side by side with the Seer as she does the alchemical enhancement of the fragrance oils.

Tina:
It’s such a miraculous journey, I’m not sure where to start… Each session, at least once a week, lasts about four to five hours. She goes through every oil again and again. Even though she felt satisfied with them after working on them the week before, she and the world around her have evolved in the meantime, and so she refines them again. She once said that when she personally edited the books she wrote, she needed to keep changing them every week as reality changed — the reason why she delegated the editing later on. Whatever the process is, the oils have become ecstasy-producing and keep getting more and more incredible, even when I think they can’t — just like the classes she teaches — they keep exceeding expectations.

The miracles are numerous, but to name a few… If one smells any bottle of oil before she begins her work, and then compares it as she works, you’ll find that it changes and improves with every other bottle she works on.

Yesterday she worked on the Oils of High Magic. Two miracles happened. First, every other oil changed yet again. Second, the oils Seven Veils and Velvet Nights spontaneously changed into the same oil — even though they each consisted of a blend of entirely different oils. She tried many different approaches, but they kept reverting back to the same oil. It took lots of focused attention for her to finally coax them back to their own unique expression.

Almine never explained to me what happened — perhaps because I usually feel so drunk and blissful after assisting her during these alchemy sessions, that I can’t think straight. But when I got home, I realized something that gave me a possible theory on why the Velvet Nights and Seven Veils wanted to be the same. Yesterday* was the last day we used Velvet Nights (for the personal Timemap) and today is the first day of using Seven Veils. Perhaps this changeover had something to do with it?

At any rate, we were running short on the High Magic oils and have had difficulty getting them from Egypt, but when she finished, the bottles were suddenly full again.